Hanuman always served. Served his masters. To him service was God! He is the epitome of servitude! Hanuman as an entity always inspired me. But of course, there are blind followers of Him who see only his muscle power and brutal force. They, unfortunately, don’t see him as the amalgamation of supreme intellectual and conceptual manifestation of selflessness, knowledge and sacrifice.

This sketch is my vision of such a moment from Mahabharata that touched me a lot. After the 18 days of violent destructive war, Arjun was feeling victorious. He was elegantly greeted by his Charioteer Sri Krishna to disembark from the chariot. As they walked a few steps away from the chariot, an old and tired looking Hanuman got off from the flag pole of the chariot. He adorned the flag of the chariot since the day the war began 18 days ago. As his tired feet touched the ground, he prayed to the charioteer lord with his folded hands, bidding him farewell as he moved on. But the moment he got off, the very chariot perished into dust. Arjun who was wielding the pride of victory on his shoulders shuddered at the sight of the collapsed vehicle that took him securely to victory all these days. That is when Krishna enlightened him about the numerous hits and arms of destruction that was deflected and absorbed by the immortal Hanuman mounted on the flag, to protect him. Adding to that Krishna told him that Hanuman was in a state of deep meditation and trance, a space and state where he couldn’t sense any pains inflicted upon him as he took it as his sole responsibility was to protect and serve the master of the chariot and the lord who was in the role of the charioteer. This sketch symbolically depicts Hanuman at the chariots’s roof at the flag pole enduring the arrows of pain meant to be inflicted on the masters, shielding the chariot from destruction.

The line art version that was shot on the phone before painting over it. Sometimes I feel painting digitally is much safer because of the infinite undo options. But the risk that we take to work over the line art is an exciting one.. it is almost like rope-walking especially when you weigh over a 100Kilos! 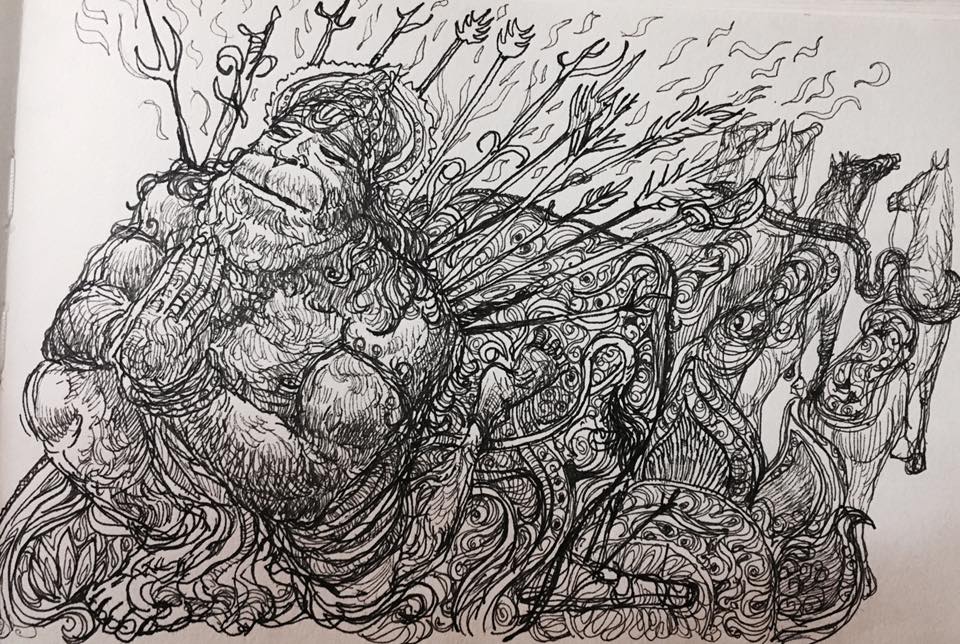 Across cultures and mythologies, it is always the noble leaders with followers who have been attributed the God-like statures. Hanuman, is an exception where an epitome of selfless service is equated to the Gods. 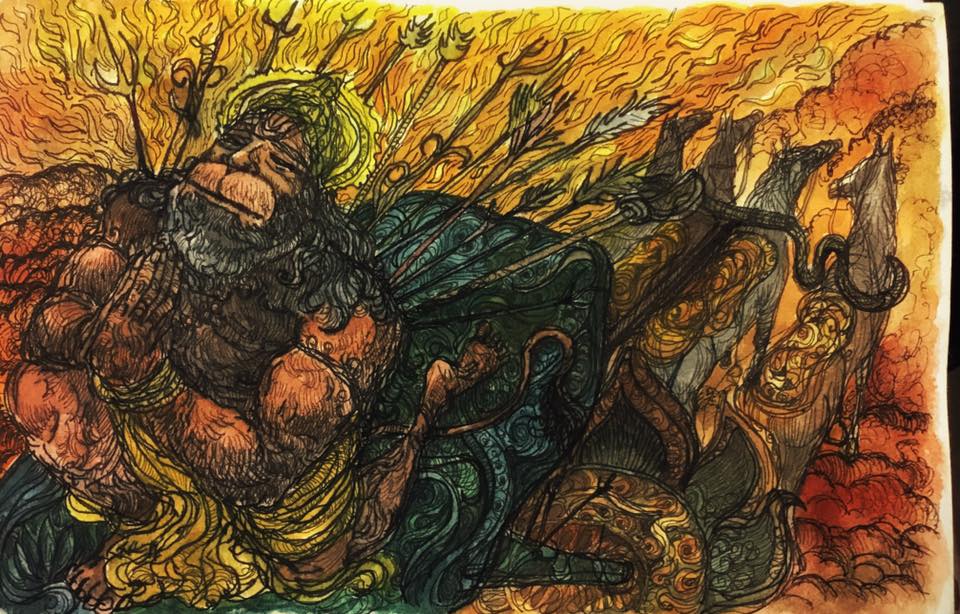 And I thought the cracks are only on the roads!