Last month I was invited to be the Chief Guest at the Design Degree Show of the young graduates from Industrial Design Centre, IIT Mumbai. So I was designated to inaugurate the show at 9:30 am on the 9th of June 2017. After the inauguration I was to give my keynote speech on the topic ‘Stories and Storytelling’ and I wanted to head back at 12 latest as I had to travel abroad the same evening.

The following images illustrate my journey to IDC from my home at Khar. Before you see them, please go through these vital statistics.

Distance from Khar to IIT Powai: 18 Kilometres
The regular time to cover the above distance: 37 minutes by road and 3 hours and 5 minutes by walking. 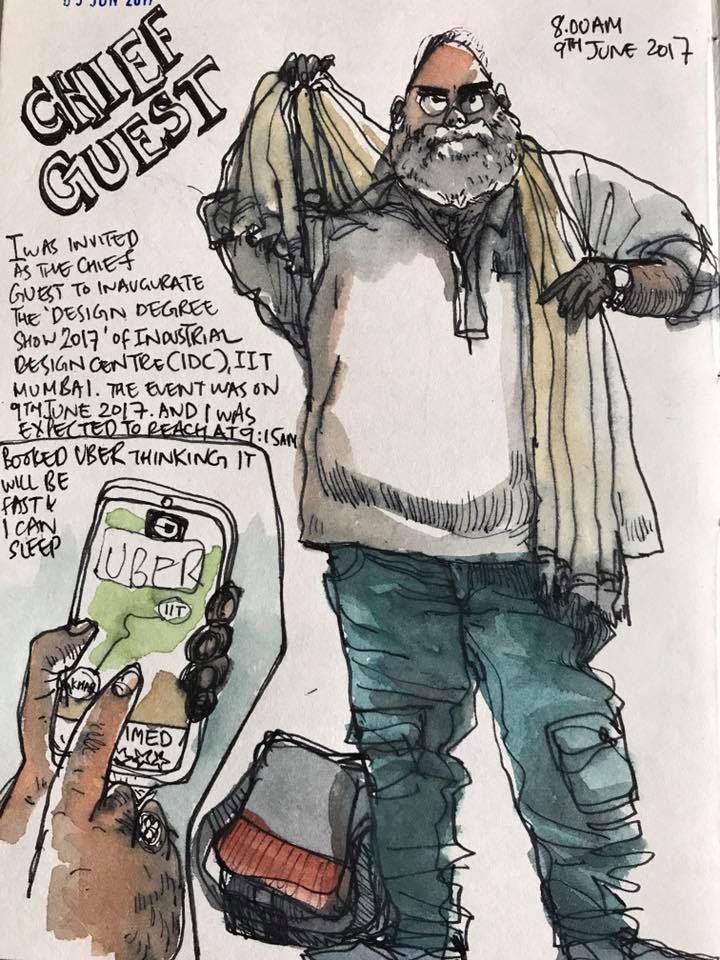 Excited to address the bright students and faculty audience at the DDS 2017 at IDC, I woke up early that day, at 6:30 am and was absolutely ready by 7:45 am. After declining the students offer to send me a car to pick up, I felt good at my own generosity! I booked a cab through Uber. Within minutes, sharp at 8 am I was en route to IIT. 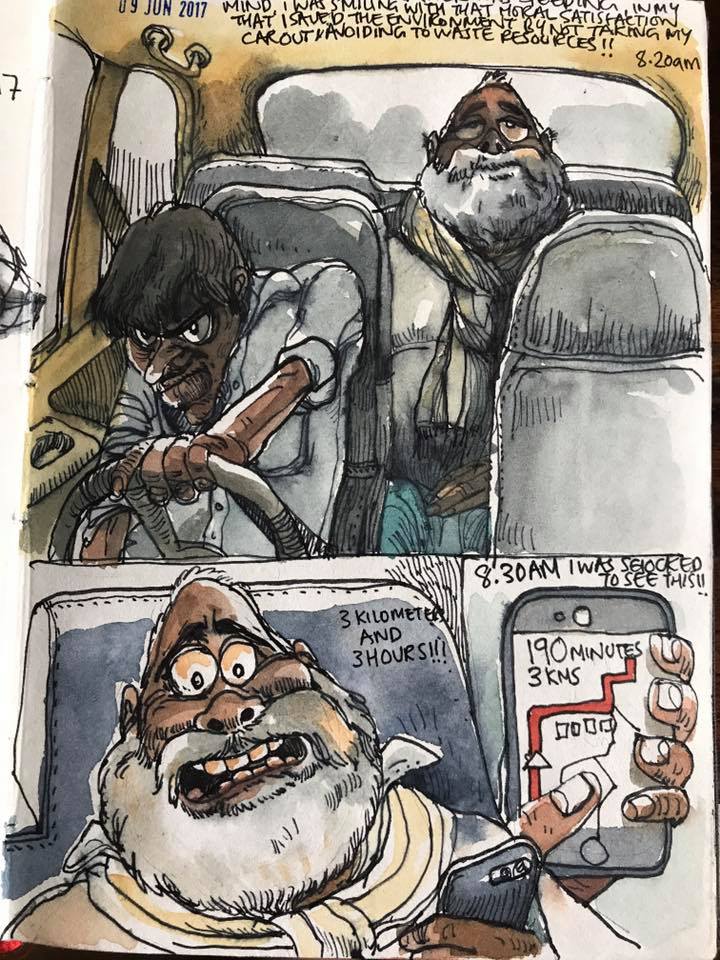 I was feeling very satisfied that the good act for mankind and the environment has been done for the day by hiring an Uber! And with that thought, I slipped into a nice nap. After covering around 9 kilometres, my fidgety fingers checked the Uber app and it showed me the shocking info! There was a red colour painted over my remaining distance to the destination! And it said 3 hours to finish the next 3 kilometres!! I first thought it is an error which Uber app goes through sometimes.. but even Google Maps showed the same status!!!

Seeing the insane static traffic ahead, my environment conscious Uber driver switched off the car engine! My palpitations began but I still couldn’t believe my luck! It was 8:30 am! I called the DDS organisers and my faculty friend Phani and gave him a rough picture of my situation trying not to panic attack him, instilled the hope that I should definitely reach the venue by 10 am even with worst traffic! 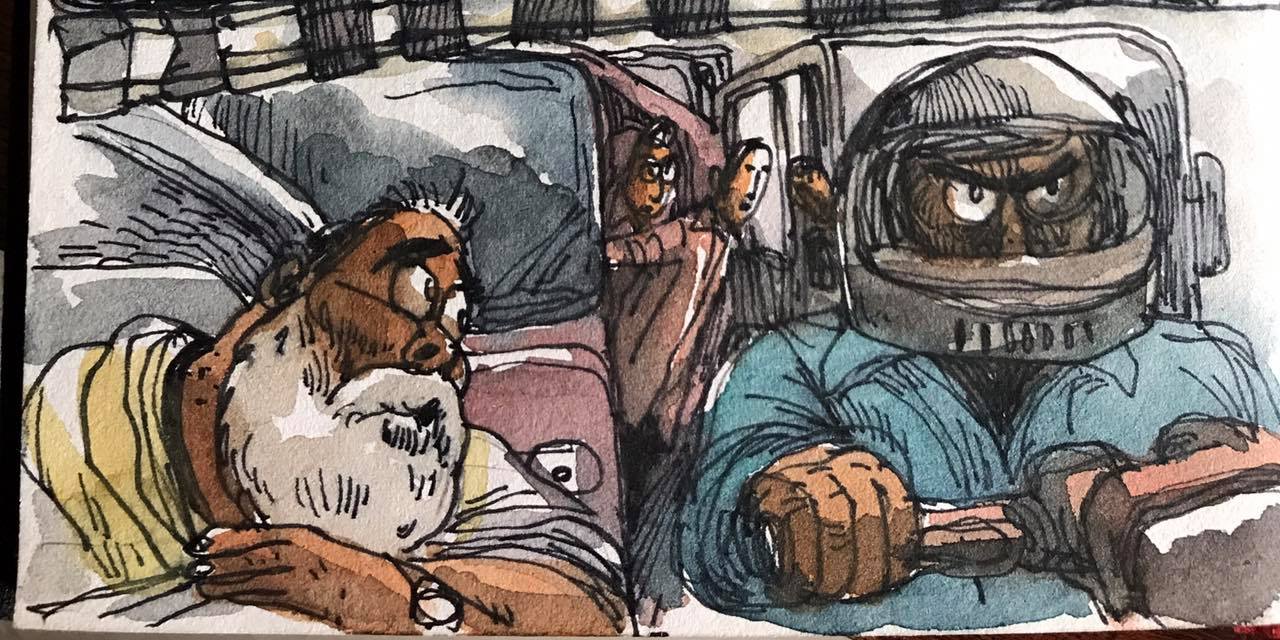 It was 8:50 am. I was looking outside and realised that the only moving vehicles were bikes! How I hate bikes!! While driving the car I hate the bikes and their riders that cut corners and squeeze through, escaping traffic jams, breaking signals forever!! Do a bit of scratch on your car and give you that ‘I am in a hurry’ look or fake apology through that awkward head shake! 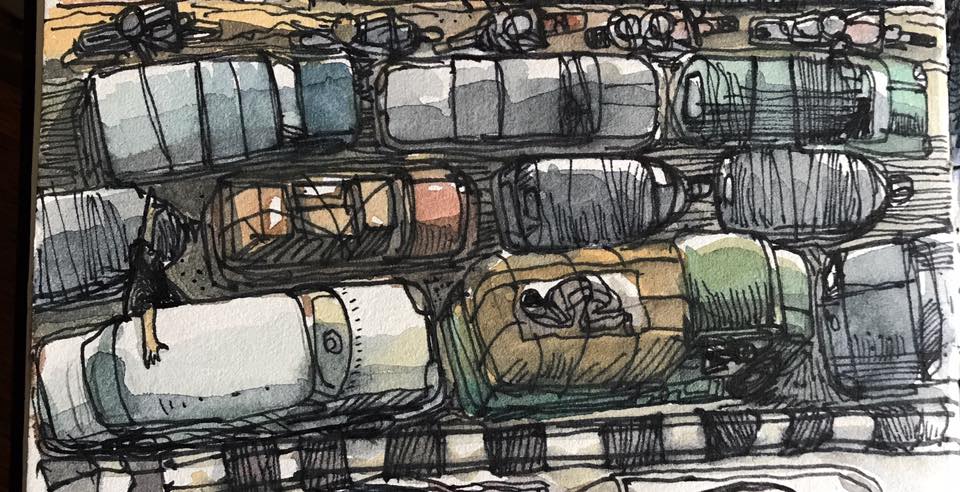 At 9:15 am I looked out of my car and saw the only vehicles that were coolly moving through the gaps and wished if I could ride a bike then and there!! At 9:30 am the wish became a strong urge. At 9:45 it was scientifically proven that if I had to reach IIT that day, the only way was by hiking a ride on a bike! 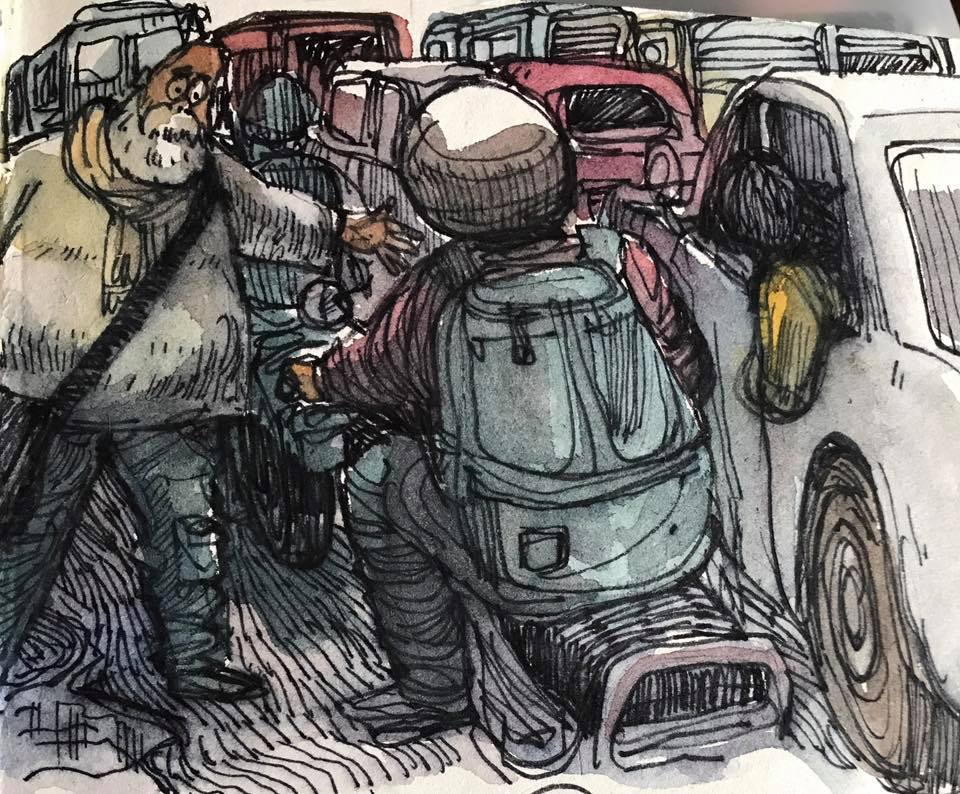 At 10 am I asked my Uber driver to stop the trip and jumped out on the road. Started waving at the bike riders. Many of them dodged and rode away, while some of them failed to notice the ‘100kg me’ waving at them for a ride, maybe for obvious reasons like their tyres may not have enough air or maybe they were scared of my appearance. Finally, an angel soul on a bike stopped next to me and allowed me to sit behind him! 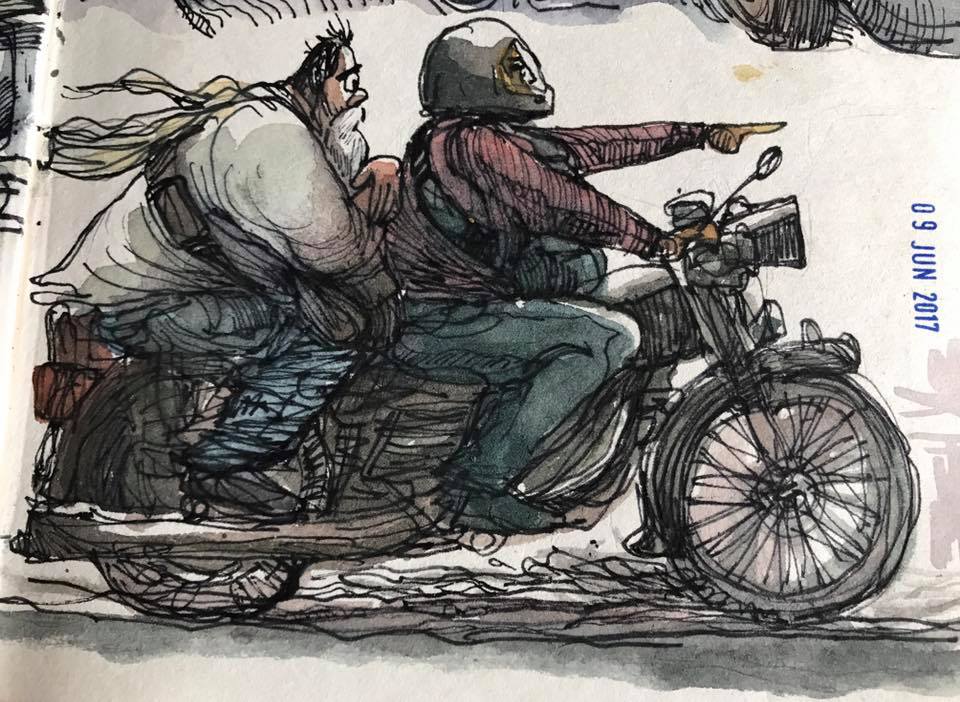 I called the organisers at DDS constantly and updated them of the situation. They were politely irritated by the ‘unpunctual Chief Guest’! Even the man who gave me the lift was saying that this is the first time he has seen such a traffic jam and since this was his regular route he was worried that his office also wouldn’t believe in him if he used the most overused excuse of Mumbai- Traffic! I agreed and in my mind, I knew it is the same case with me too! 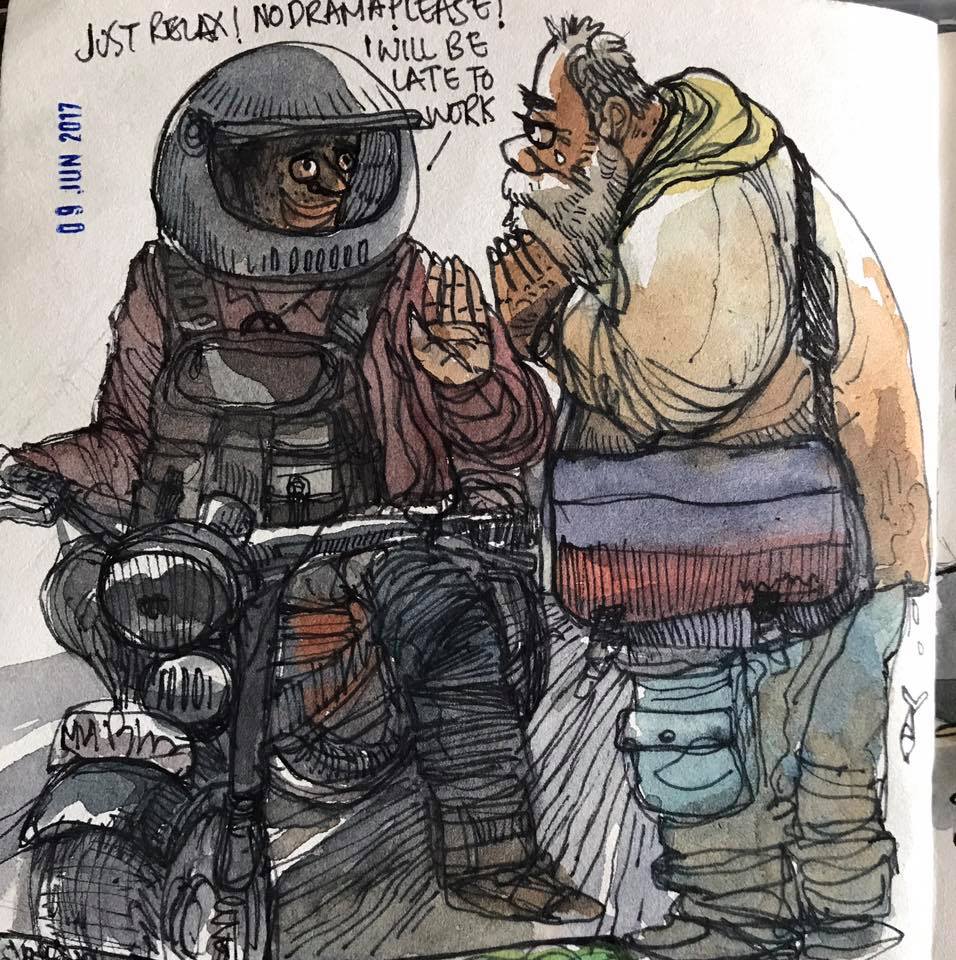 The ride was difficult. It was through really narrow paths and gaps. If avoiding buses brushing our bodies was a challenge, dodging the spit missiles from the bus passengers was even tougher! Somewhere deep inside me, my 45 minutes long respect for the ‘bike riders’ was growing to a semi-worship/adulation! A sort of Stockholm syndrome! What all they suffer to get to a destination and I felt a bit guilty thinking how we laughed at them when they slipped and fell after the first rains!! I thanked Mohammad (name changed) incessantly after he dropped me to a rickshaw at 11 am. He simply laughed and said ‘Chalta Hain Sir’ (it’s not a big deal!) and rode away to his office. 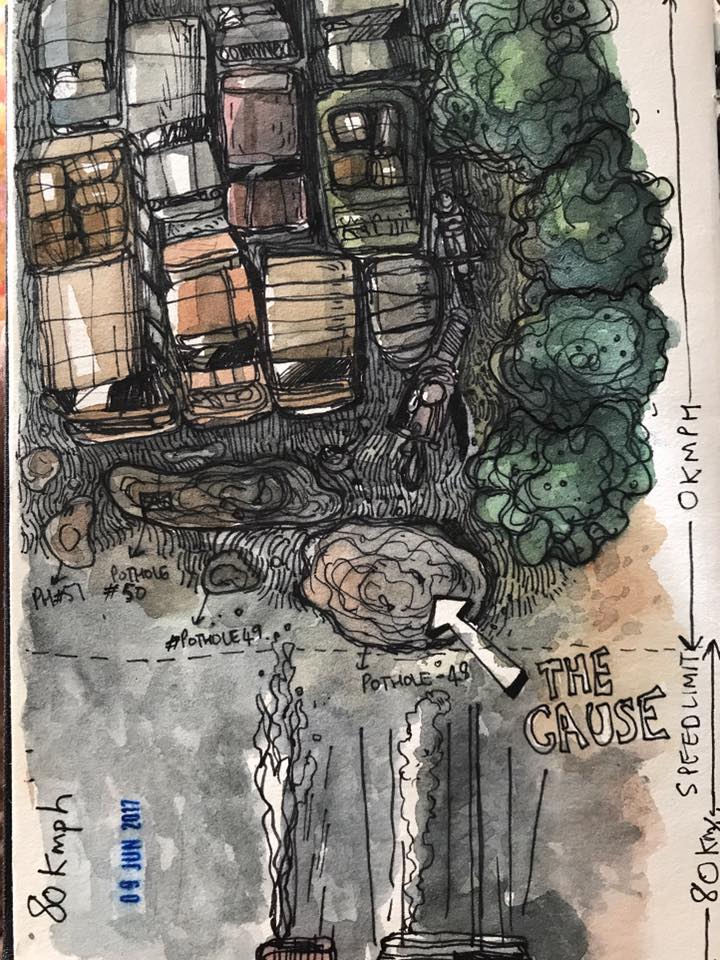 This is a bit of back story. The Cause of the traffic jam. I have often seen in Mumbai that after kilometres of jam you will not see any substantial cause for the havoc created- like no big accidents or roads suddenly caving in! Here too after all that 3 kilometres long traffic jam and commotion that cost us 2.5hours of our life, we realised that it was because of a few potholes!!! Last few years our Municipal corporation has been diligently numbering potholes. So the culprits here were potholes numbered #48, #49, #50 and #51! At least we know the exact, precise reason for our torturously long journey. But why so much traffic for these potholes?!

I figured the drivers had no idea how deep the potholes were and hence were hesitant to drive over them! So I volunteered to dive and measure them.

It was mostly 8 inches deep and only at some places they were over a foot deep!! Still not enough reason for such a big traffic jam!

Mohammad dropped me to a rickshaw and ensured that the driver didn’t refuse to give me a ride till IIT. By the way after the pothole #48 the traffic was flying and how!

I got inside the green campus of IIT and got off a little before the hall where I was to speak so that those who were waiting to receive me wouldn’t see me in my condition. 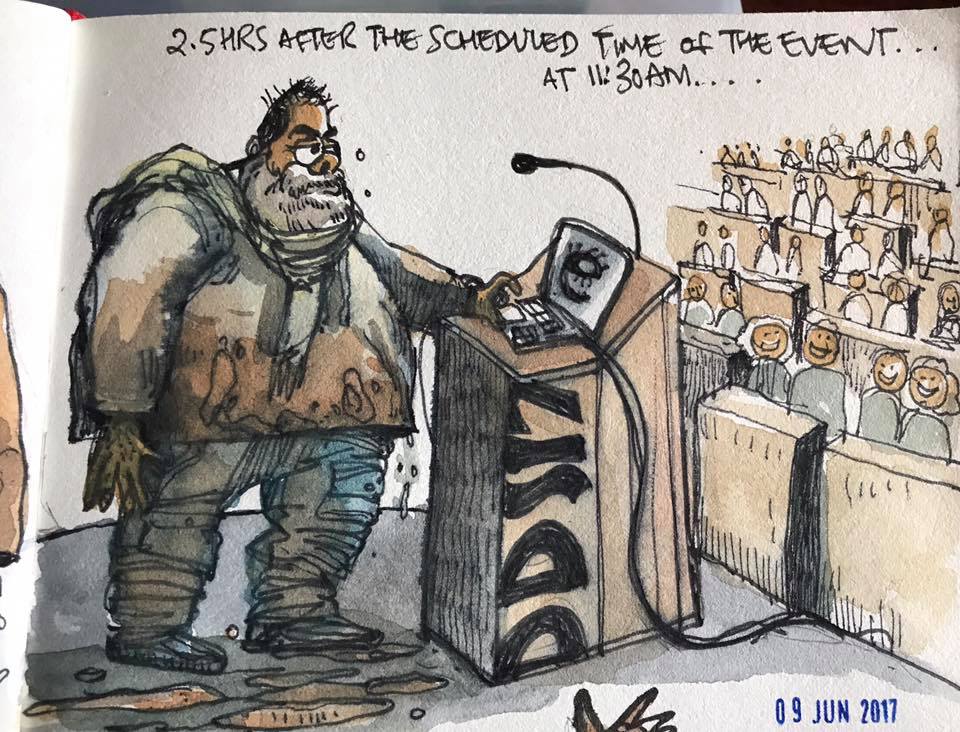 11.30 am – Sneaked in from behind and stood before the crowd to start on the ‘stories and storytelling’ topic! 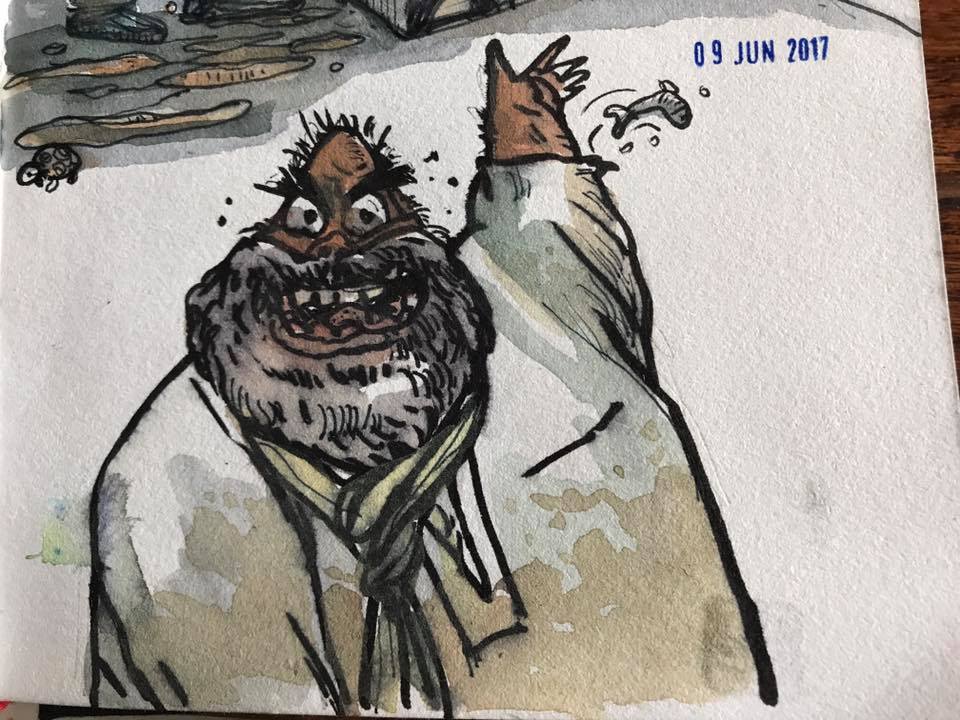 Well, I had more than a story to tell them with just one helluva journey and the life lessons I learnt out of this wonderful experience!! PS. I couldn’t ask the man who gave me the bike ride whether he eats beef or not.

Perks of working in a unisex salon